Make-A-Wish® Michigan and the Davison Athletic Club will host a viewing party this Wednesday, July 2

Mackenzie Toman had a wish and the Michigan Make-A-Wish Foundation made it come true.

Her wish to meet the U.S. Women’s National Soccer team recently became a reality at Soldier Field in Chicago. Her story is scheduled to be featured Wednesday on ESPN during the 6 p.m. “SportsCenter” broadcast.

The 13-year-old from Davison was born into a soccer family. A brain malfunction, which required surgery, hasn’t suppressed her love of the sport. She’ll be a freshman at Davison in the fall and will try out for the soccer team in the spring.

“I’ve been playing soccer for most of my life,” Toman said. “I enjoy how much fun it is. You need to be committed to doing what you have to do.”

As far as her health, she said she feels “fine.”

Her experience with the national team will be with her for the rest of her life.

“It was fun,” she said. “I pretty much met everyone on the team. It was an awesome experience. What do I remember? How sweet they were as they stood around and all of them tried to sign the jersey that they gave me.”

She was accompanied on the trip by her dad, Trevor, her mom, Michelle, and her brothers, who all play soccer.

Steve Buckheit produced the piece and said Toman was overwhelmed during her visit with the team.

“We were with her and her family last week for two days with the Women’s National Soccer Team,” Buckheit said. “Then back in June we spent a couple of days in Davison. We sort of had a surprise party where we revealed her wish had come true with the team. We spent a day at her house and met her family, and we went to school with her for a little bit.

“I think the two days in Chicago were fantastic. I think Mackenzie, at times, was breathless. She took it all in. I think she was a little overwhelmed and really speechless at times. That happens a lot with our Wish kids. Taking in everything: the stadium, Soldier Field, to just the experience of seeing how intense the players practiced. … Her being a soccer player herself and her dad being a soccer coach and her brothers having all played … I think they really appreciated the practice and how intense the U.S. women’s team practiced.”

Mackenzie wouldn’t predict a gold medal for the U.S. team in the upcoming Rio Olympics.

Make-A-Wish Michigan grants the wishes of children with life-threatening medical conditions. Since 1984, the organization has granted 8,500 wishes. The goal this year is to grant 440 wishes.

Including one from Davison.

“Make-A-Wish came through for me,” Toman said.

She won’t practice again until spring, but has a busy summer ahead.

“I have soccer conditioning, which is every Monday through Wednesday at night,” she said. “Then I’m helping my mom’s brother get ready for a wedding. On my dad’s side, his sister is getting ready for her wedding.

“One is in August and the other is in September. I’m in one of the weddings.

“The bridesmaid dresses aren’t bad. Actually I just got it. As long as the colors were the same she wasn’t picky about the length of it.” 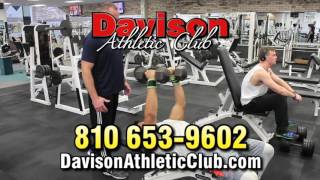 Looking for a family oriented gym?